Video has become the thing to do in the last few years, YouTube, Facebook Live, Instagram Stories. It’s everywhere! But where do you start? In today’s episode, we are talking about how to get started sharing your story on video and why YouTube is a great option to pair with your blog.

Tasha Cochran is the co-founder, wealth expert, and business strategist behind One Big Happy Life, where she helps people grow their income and learn to spend intentionally so they can live their dream life today while also building wealth along the way. In less than two years, Tasha has built a multi-six-figure business, grown a social following of over 200,000, and amassed over 16.6 million views on her YouTube channel. Tasha has been featured in Forbes, Oprah Magazine, and The Wall Street Journal.

Video has become the thing to do in the last few years. Youtube, Facebook Live Instagram Stories, Tic Tok. It’s everywhere. But where do you start? What about editing, storage, scripts?! Well, you’re in the right place to find out.

Hi, I’m Liz Stapleton, hosts of the Blogger Breakthrough Summit, and welcome to the podcast. In today’s episode, I’m sharing tips for getting started in video from YouTube star and blogger Tasha Cochran. Her YouTube site has over 100,000 subscribers. I think even more than that now. She gave us these tips during the 2021 Blogger Breakthrough Summit. To hear all of her tips for getting started on YouTube, head over to bloggerbreakthrough.com/podcastdeal to get access to the 2021 Summit sessions in their entirety, including Tasha’s. Let’s get started.

You started YouTube, you want to kind of talk maybe about, sort of, YouTube vs. Blogging and how they kinda go hand in hand or where they don’t or your thoughts on this.

Yeah. So the power of YouTube, at least, especially for me. I love to write, but I am someone that gets writer’s block like nobody’s business. And so a blog post can take me a really long time to write, whereas very few people get speaker’s block, talker’s block. And so for me, I just found that it was so much easier for me to get my ideas out on video with just a basic outline than it was to write a blog post. But the really powerful thing about YouTube, in particular over blogging is that when you blog, okay, now you’ve got your content, but then you’ve got to figure out a way to push it out there and get it in front of eyes.

So you’ve either got to add on SEO or Pinterest or some other sort of social media marketing or paid advertising. But with YouTube, you have the YouTube algorithm, which is Google, working for you, where you can show up in Google search. You show up in YouTube search, because YouTube is a search platform, and it’s constantly serving even your old content to new people. So it’s very much an evergreen platform. So that’s why I prefer YouTube over blogging. But I also recognize, and everyone should recognize, that you don’t own YouTube, so be very careful about building your audience and your entire business on some other platform that you don’t own.

You do own your blog. And so it’s a great opportunity to put the two of them together so you can embed your videos on your blog, which gives your blog also SEO juice, because that additional asset.

Yeah, exactly. And a lot of people too, when they watch your videos on YouTube. Some people like to read what you say even after they’ve watched you say it. They want to go deeper. So it gives them this extra bit of value add to say, “Hey, go on over to my website, and I’ve got it all written out for you in the blog post so you can follow it step by step and also opt into my email list and get tagged by my Facebook Pixel so that you can stay in my universe.”

So then once, I think people can figure out “Okay, I’ve got an outline.” There’s a gazillion things you can use to record your phone, Photo Booth on Mac. I’m sure there’s an equivalent on PC. Once you’ve recorded, what do you do with the video? Where should you edit it? Editors can be overwhelming…you know for people just getting started, what would you suggest?

So I will say that I have edited using Premiere Pro basically from the beginning. Now, in the very, very beginning I had a Mac, so I used iMovie, but it was a MacBook Air and a MacBook Air cannot, at least back then, I don’t know what’s going on with them right now, couldn’t really handle what I was trying to put it through, which is basically simple cuts. Now the great thing about iMovie is that it has some fun little, you can do things like add little end screens and add little end titles in very easily whereas that is incredibly difficult to do in Premiere Pro. You’ve got to know what you’re doing, and chances are you might even need to pull in AfterEffects to get that to work.

So that’s the downside of Premiere Pro, but you don’t need any of that fancy stuff to be successful on YouTube. I still don’t do any of the fancy graphics and editing on my video because I fully believe in that pareto principle. You know, the 80/20, like 20 of your work gets you 80 of the result. And so I think that those fancy things are like part of that extra that extra 20% that you don’t even need when you’re starting out, too fancy. But I do like Premier Pro because I personally feel that it is very easy to use.

You don’t have to use any of the bells and whistles, but it’s very easy to use. And I like using kind of doing things right from the very beginning versus going with the cheapest thing and then having to do all these workarounds and spending time, which is a finite resource when you could be spending money, which is infinite. So I like Premiere Pro. Having said that there are free ones out there or cheaper ones like Movavi, I think is one of them. Filmora. It’s hard for me to say because I don’t use them.

But here’s what I say. Just keep it simple. You do not need a whole bunch of fancy editing. You don’t need scribbles. You don’t need titles. You don’t need any of that stuff when you are just starting out. Don’t let that stop you from getting started. All you really need is to sit down, shoot your video, do your intro, tell them what you’re going to talking. First of all, tell them what you’re going to be talking about. Do your intro, deliver your main content, have a call to action at the end, and you’re done right. You can add all of that other stuff later.

Yes. Okay. So a couple of follow up questions based on some of the things you said. What would you suggest? Like, I know some people do storage on external hard drives versus a computer. Is that something you recommend?

Seo, we have done things a lot of different ways. It’s been many a year now since we’ve been making YouTube videos. And so when we started, we edited on laptops. We still can edit on laptops. We just get really powerful PCs. And I know a lot of people are Mac people. And so they think that Mac are actually the better machine. But they’re not. When you’re looking at high end specs. So, all of our laptops outperform high end Macs, and they cost well, our desktop costs more than the highest and Mac, but like, our laptops will cost less than the highest and Mac, but have better specs.

You do not want to keep them on your computer because they take up a ton of space. So we actually have multiple servers in our house to store all of our, because all of our videos 4K, which is like four times the size of standard HD. And over the years that stuff adds up. And I haven’t been wanting to get rid of any of the footage. And so here we are. I don’t even know how many terabytes later of storage trying to keep up with it. But just to start out, start with a 1 TB external hard drive.

You look at sales. Black Friday, New Year holiday sales. Like you could find them cheaper.

Exactly. And you could also choose to not keep all of your original footage. It’s not…See we did, especially in the beginning. We were doing a lot of family Vlogs and things like that. We did brand partnerships with Visit Florida. So we went down to the Florida Keys and has all kinds of footage as a family there. So it’s almost like home movies that I don’t want to get rid of. But for you, like our talker videos where I’m like Five Ways to Build Wealth This Year, we can get rid of that core footage and just keep the final file right?

The final rendered video so that can save you a ton of space, too. Yeah. Okay.

Hopefully, this episode has helped answer some of your burning questions about how to get started making videos for your blog. Be sure to join me next time when we take a look at creating lead magnets that convert.

I’ll catch you then! 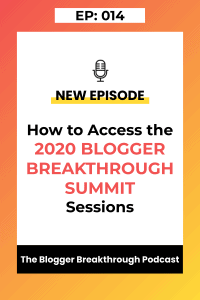 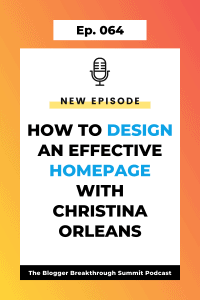 Shownotes: Reach your blogging goals can be made exponentially easier with an effective homepage design. Listen in to today’s episode, as we cover the basics of what makes it takes to create an effective homepage to reach your goals.  Guest Info Christina is a WordPress designer and developer for bloggers who take their business seriously…. 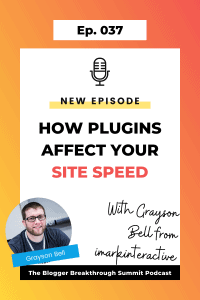 Shownotes There is a common misconception that too many plug-ins slow down WordPress sites causes confusion for many users in the online world. In this episode get some tips on optimizing your plug-ins and still getting the site features that you want.  Guest Info: Grayson is the founder and CEO of iMark Interactive, a full-service…

Shownotes: Despite what we tell ourselves, no one can do it all! Delegation is the key to success, but are your systems ready? In this episode find out tips on what to delegate first and how to make the transition easy for everyone!  Guest Info Cara is a wife, mom to a 13-year-old stepson, 4-year-old… 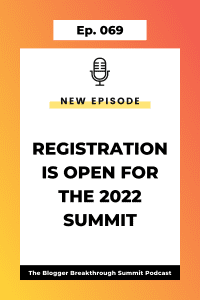 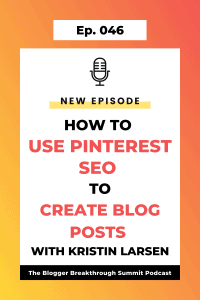 Shownotes Pinterest is a great tool for any blogger but many don’t know where to start. Nailing SEO and knowing your keywords is key to getting found, but how do you do that? In this episode you’re going to learn some awesome tips for finding more keywords for your Pinterest pins to grow your reach…