Spending a ton of time creating what you believe to be amazing social media content, only to have it linger in the ether without any engagement is no fun. In this episode Jerry Potter walks you through some quick to implement tips to start getting engagement on your social media posts.

Jerry Potter is the founder of the Five Minute Social Media movement, where he’s helped empower over 500,000 people around the world to do their own social media marketing, all with a focus on simplicity and efficiency. Living in Seattle, he spends his time with his wife and two Tiny Humans, and is on a quest to prove Diet Coke is actually good for him.

[00:00:00].090] – Liz Stapleton
If you’ve been feeling like you’re wasting away creating social media posts that don’t get any traction,
then you’re going to love today’s episode.

[00:00:27].980] – Liz Stapleton
Jerry Potter from Five Minute Social Media shared these tips during the 2021 Blogger Breakthrough
Summit, which, by the way, if you missed the Summit, if you stay tuned to the end of the show, you
can learn how to get access.

[00:00:39].170] – Jerry Potter
The most common social media problems that I hear about from people: Number one, “I have no
reach and, or engagement”, because if nobody’s seeing your posts, they’re not engaging or both. Well,
your social media is kind of dead in the water, right?

[00:00:56].220] – Jerry Potter
You’re posting and nothing’s happening. It’s like being an unpaid social media intern in your own
business.

[00:01:01].950] – Jerry Potter
Let’s start with the first one. Up first: “I have no reach or engagement.” And we usually blame social
media algorithms for this, right? The algorithm just won’t show my posts to people.

[00:01:14].310] – Jerry Potter
And a lot of times people will ask me, how do you beat the algorithm? How do I hack the algorithm?
And I wish that I could tell you that Mark Zuckerberg, founder of Facebook, sent me a text message
once upon a time saying, “All you got to do is post 3.46 times per week and we’ll show all your posts
to all your followers.”

[00:01:35].250] – Jerry Potter
Unfortunately, that’s not true. But here’s the thing: The algorithm can’t be beat. It can’t be hacked. But
it can be romanced. And I say this because you have to work with the algorithm; charm it; be friends
with it. Otherwise you shouldn’t even bother posting.

[00:01:54].580] – Jerry Potter
If you are not going to post in a way that the algorithm helps you, then don’t bother. You will remain an
unpaid social media intern in your business, as I did for a really long time.

[00:02:06].700] – Jerry Potter
So we’re talking about engagement, reach and sales today. So let’s talk about engagement versus
reach. So engagement is exactly what it sounds like. People engaging on your posts; liking,
commenting, sharing, clicking the link through to your blog. All of that. And reach is the number of
people who see your posts.

[00:02:41].410] – Jerry Potter
But the important thing to know is that it’s not engagement versus reach so much as it is engagement
equals reach. They are directly tied to each other. So when you put up a post on any social media
network, the algorithm doesn’t know how good it is. Instagram doesn’t know that you took an
amazing photo.

[00:03:01].120] – Jerry Potter
LinkedIn doesn’t know that the stuff you’re saying is life-changing. Facebook doesn’t know that you
spent 37 hours making the perfect graphic in Canva. All the algorithm knows is whether or not
someone engages with it.

[00:03:14].650] – Jerry Potter
So when someone likes your post, the algorithm thinks, “Oh okay. This might be okay content.” When
more people start liking it, commenting, sharing, the algorithm goes, “Oh, this is great content. I’m
going to show this to more and more people.”

[00:03:29].260] – Jerry Potter
So that takes us back here: Engagement equals reach. The more engagement you get, the more
people your posts will reach. So to romance the algorithm, you’ve got to get engagement.

[00:03:41].530] – Jerry Potter
Let me get you started with a few of my favorite easy ways to increase your engagement today.
People have started applying these and immediately seen results, which I love.

[00:03:52].180] – Jerry Potter
And the first one is going to be super, super obvious. But a lot of times when somebody says, “Yeah, I
just can’t get any engagement”, and I’ll do an audit of their Instagram account or their Facebook
business page, or whatever it might be, I notice that they are not asking for engagement.

[00:04:11].680] – Jerry Potter
Sometimes that’s all it takes. You have to ask. Remember somebody scrolling a social media feed is
busy. They are, even if it’s kind of an oxymoron, right? Well, if they were busy, they wouldn’t have time
to scroll to social media feed.

[00:04:44].650] – Jerry Potter
Number two is to take a stance. This is one of my favorites and I love it because it makes a massive
difference. And I’ll share an example here in just a second. But taking a stance means that you are
more likely to get engagement because you’re going to elicit a response in somebody else.

[00:05:07].330] – Jerry Potter
Now, when we feel an emotion, we are more likely to comment on a post, if a Facebook post makes
us feel something. And sometimes all that takes is taking a stance. I’m going to use a silly example.
But if you posted, “Do you like pineapple on pizza?”

[00:05:48].850] – Jerry Potter
But you took a stance and it doesn’t have to be frivolous like that. It could be about your product or
your industry or any number of things.

[00:05:57].250] – Jerry Potter
But when you take a stance on things, people will have an emotional reaction because they will either
agree or disagree with you. Alright? And as a blogger, you’re probably taking a lot of opinions and
stances, I would think, for most of you anyway.

[00:06:10].960] – Jerry Potter
And then the third one: Comment on your own post. I love this one because it has exponentially
increasing effects when it comes to engagement. I’ll show you what I mean.

[00:06:23].140] – Jerry Potter
So on this post, I said, “For your business, did you design your own logo or hire someone else? My
awkward answer below. And this was just an organic post. It got 117 comments. And when I asked
this, I really didn’t know that it was going to take off like this, but it did.

[00:06:40].700] – Jerry Potter
But here’s the principle here. You notice I said, “My awkward answer below.” So when you post this, I
said, “For your business, did you design your logo or hire someone else?” If somebody comes along
and they don’t have an answer right away, but they’re like, “Oh, I wonder what his answer is? Oh, and
it’s awkward.”

[00:06:55].870] – Jerry Potter
They’re going to click on that thing that says 117 comments. So when they do that, that counts as
engagement because they clicked on it. Oh okay, engagement. Then if they read my answer and they
click like on it, that counts as engagement.

[00:07:12].430] – Jerry Potter
If they then reply to my answer, that is also engagement. And if they’re moved to then leave their own
answer, because I’ve given an example, that’s more engagement.

[00:07:23].170] – Jerry Potter
And if a bunch of people start commenting, and then people start going through, even if they’re not
going to post themselves, and they start liking other people’s comments and replying to them; that’s
all engagement as well.

[00:07:48].700] – Liz Stapleton
I don’t know about you, but I’m excited to try these strategies out. If you’d like to hear what other tips
and strategies Jerry shared during the 2021 Blogger Breakthrough Summit, head over to
Bloggerbreakthrough.com/Podcastdeal, all one word, to find out how you can get access to all the
Summit sessions, including Jerry’s. Catch you next time. 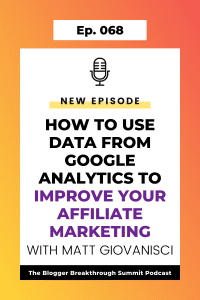 Shownotes: If someone told you the secrets to improve your affiliate marketing strategy, you would make those changes today, right? Well, that’s where Google Analytics comes in! In today’s episode, we are going to learn how to use data from Google Analytics to improve your affiliate marketing conversion and revenue.  Guest Info Founder of MoneyLab.co…. 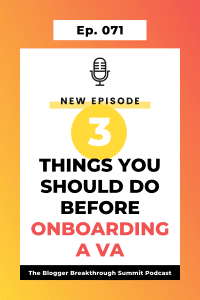 Shownotes: Yay! You are ready to hire your first Virtual Assistant. Or are you? Listen in to today’s episode as we learn the three things you should do before onboarding a VA to make your outsourcing journey a success.  Guest Info Kayla Sloan is a business coach for virtual assistants and a business systems and… 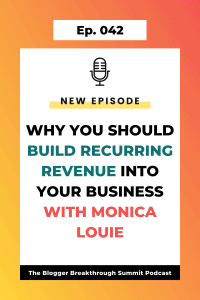 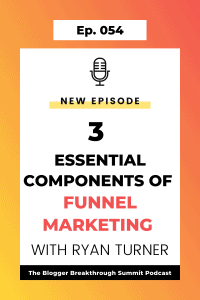 Shownotes: Sales and Ads don’t have to be salesy. Funnel Marketing can teach you how to offer value to your audience and use strategic calls to action so you don’t have to feel like a used car salesman every time you publish a post. Guest Info Ryan Turner is founder of Amplifi Strategy, a a… 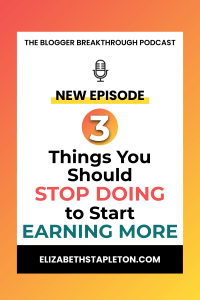